Student file of Maggie Goleach Reed, a member of the Eastern Band of Cherokee, who entered the school on June 20, 1901 and departed on August 30, 1911. The file contains a photograph, correspondence, medical/physical records, an outing record, a report after leaving, a financial transaction, student information cards, a news clipping, outing evaluations, former student response postcards, returned student surveys, and an application for enrollment. 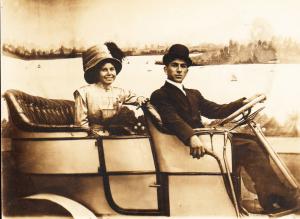