Student file of Justin Head, a member of the Apache Nation, who entered the school on February 2, 1884 and departed on March 1, 1892. The file contains student information cards, a returned student survey, land grants, parole records, an outing evaluation, correspondence concerning Head's parole, a trade/position record card, a medical/physical record, financial transactions, newspaper clippings, a Senate resolution, and a report after leaving. The file indicates that Head was living in Florence, Arizona in 1911 and living in Trenton, New Jersey in 1915.

Note: At the time of scanning in the U.S. National Archives, several documents in this folder seemed to relate to a different student, Henry Herrara. Those documents have now been included in the Henry Herrera file: NARA_RG 75_Series 1327_box 107_folder 4523. 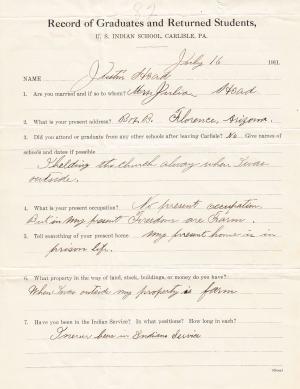