Student file of Ernestine Venne, a member of the Chippewa Nation, who entered the school on September 24, 1904 and ultimately graduated in 1912, departing on May 15, 1912. The student did not attend the school continuously, but left and reentered. The file contains student information cards, former student response postcards, medical/physical record, applications for enrollment, outing evaluations, letters/correspondence, a report after leaving, an outing record, and a progress/conduct card. The file indicates that Venne was living in Lawrence, Kansas in 1913 and living in Palo Alto, California in 1914. 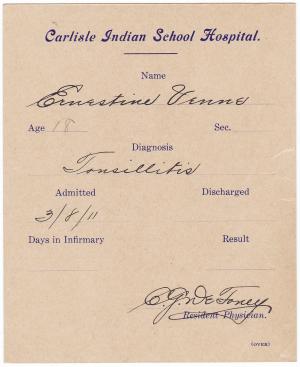