Investigation into Printer's Mismanagement or Theft of School Newspaper Revenue

Furthermore, Friedman forwards clerk S. J. Nori's investigation into the finances of the school newspaper called "The Arrow." Nori states that Baker was responsible for the paper's finances and finds that money earned from selling advertisements, totaling at least $113, hasn't been accounted for. With Baker's unpaid debts and likely theft of advertising revenue in mind, Friedman recommends that his leave request be denied and that for a more thorough investigation be undertaken prior to letting Baker start another position in the Indian Service. Friedman and Nori also forward receipts from Carlisle businesses that verify that they purchased ads in "The Arrow." Acting Commissioner of Indian Affairs C. F. Larrabee agrees with Friedman and denies Baker's leave request. 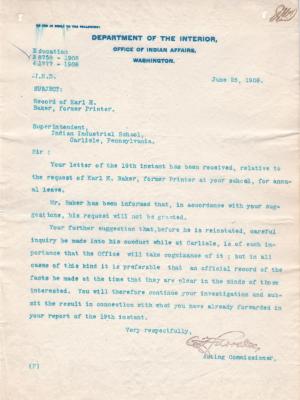