Denial of Claims in Article Regarding Former Carlisle Students

William A. Mercer forwards a New York Times article covering the arrest for desertion from the U.S. Army of four members of the Seneca Nation. Mercer comments the article is full of falsehoods and that only two of the men were former Carlisle students and did not have good records as students.

In a separate note Francis E. Leupp asks that Mercer's letter be forwarded to the paper but not quoted from directly. 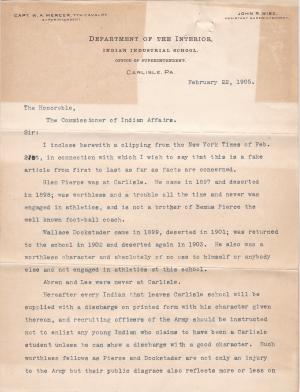