Student file of Wilson Silas, a member of the Oneida Nation, who entered the school on March 28, 1911 and departed on October 11, 1913. The file contains a trade/position record card, a student information card, a medical/physical record, an application for enrollment, outing evaluations, an outing record, a report after leaving, financial transactions, a progress/conduct card, and correspondence including letters regarding the outing system and various patrons. The file indicates that Silas was living in West De Pere, Wisconsin in 1913, working in a sawmill in Odanah, Wisconsin in 1913 and 1914, living in West De Pere, Wisconsin in 1914, was working on a farm in South Dakota in 1915 and 1916, and working in a paper mill in South Kawkawna, Wisconsin in 1917.

Note: A document of Wilson Silas was originally found in the folder of another student; Cleveland Schuyler, NARA_RG 75_Series 1327_box 84_folder 3919. 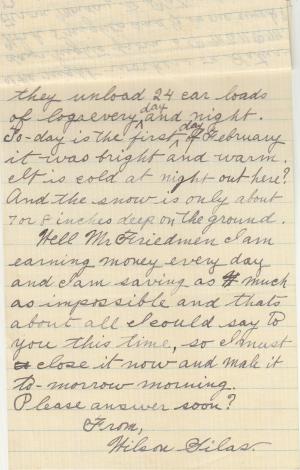