Student file of Rose Pickard, a member of the Wichita Nation, who entered the school on July 7, 1903 and ultimately departed on May 11, 1912. The student did not attend the school continuously, but left and reentered. The file contains an outing record, student information cards, medical/physical records, an application for enrollment, outing evaluations, progress/conduct cards, and a report after leaving that indicates Pickard was an assistant matron in the Indian Service in Lawton, Oklahoma in 1912.

Note: This student is known as both Rosabel Pickard and Rose Pickard during her time at the school. 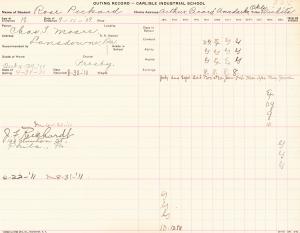