Student file of Ned Wilnotah, a member of the Eastern Band of Cherokee, who entered the school on December 2, 1911 and ultimately departed on July 6, 1917. The student did not attend the school continuously, but left and reentered. This file contains student information cards, an application for enrollment, outing evaluations, a federal financial aid form, certificate of promotion, an outing record, financial transactions, medical/physical records, and correspondence. The file indicates Wilnotih worked at the American Iron and Steel Company on the outing program in 1916 and a 1918 letter of recommendation from Wilnotih's Instructor in blacksmithing indicates that Wilnotih was searching for employment after his time at the school.

Note: In this file the student is identified as Ned Wilnotah, Ned Wilnotih and Ned Wilnoty. 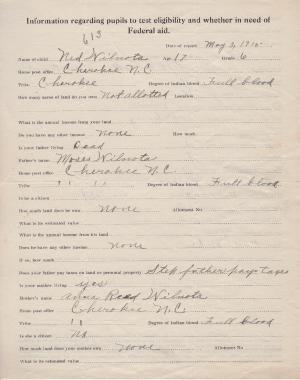