Student file of Leslie James, a member of the Chippewa Nation, who entered the school on December 4, 1909 and ultimately departed on February 8, 1917. The student did not attend the school continuously, but left and reentered. The file contains a returned student survey, financial transactions, an application for enrollment, medical/physical records, outing records, student information cards, trade/position record cards, a progress/conduct card, a former student response postcard, a federal financial aid form, and correspondence. The file indicates James worked at Neusbaum and Co. in Carlisle, Pennsylvania in 1911 and at the Ford Motor Co. in Detroit, Michigan in 1915 on the outing program and lived in Saganing, Michigan in 1913.

Note: One of Leslie James' documents was originally found in the folder of another student; James Carter, NARA_RG 75_Series 1327_box 87_folder 3986. 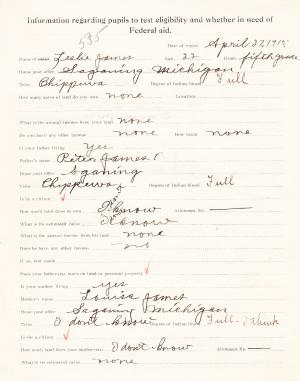