Student file of Jacob Jackson, a member of the Mohawk Nation, who entered the school on March 9, 1912. No final departure date is given. The file contains a student information card, an application for enrollment, a medical/physical record, outing evaluations, outing records, financial transactions, and correspondence. The file indicates Jackson remained at his outing home in Carlisle, Pennsylvania as the school closed in 1918 and was living in Carlisle, Pennsylvania in 1919.

Note: At the time of scanning at the U.S. National Archives, several documents in this student file seemed to relate to a different student, Angeline Coulon. Those documents have now been included with the Angeline Coulon file: NARA_RG 75_Series 1327_box 127_folder 5065. 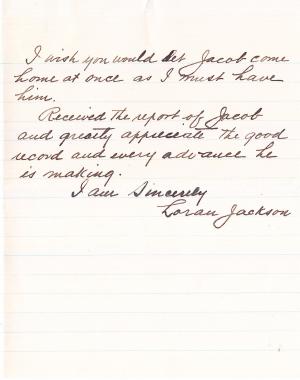