Student file of Ella Johnson, a member of the Seneca Nation, who entered the school on August 18, 1903 and departed on June 24, 1912. The file contains a news clipping, photographs, a medical/physical record, a student information card, an application for enrollment, a report after leaving, a financial transaction, a former student response postcard, outing evaluations, a progress/conduct card, an outing record, returned student surveys, and correspondence. The file indicates that Johnson was working as a housekeeper and cook in Batavia, New York in 1912 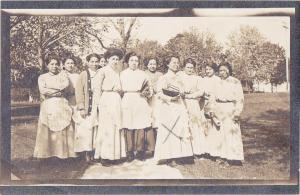