Student file of Delia Chew, a member of the Tuscarora Nation, who entered the school on August 16, 1906 and departed on July 7, 1908. A note in the file indicates that she re-enrolled on September 11, 1911 and departed on June 11, 1917 before re-enrolling in September 16, 1917, but no final departure date is given. The file contains student information cards, a news clipping, applications for enrollment, outing evaluations, outing reports, an outing report to parents, a report after leaving, a medical/physical record, certificates of promotion, financial transactions, a returned student survey, and letters/correspondence. The file indicates that Chew was living in Swarthmore, Pennsylvania in 1918 following the closing of the school and intended to enter the German Hospital in Brooklyn, New York for training as a nurse. 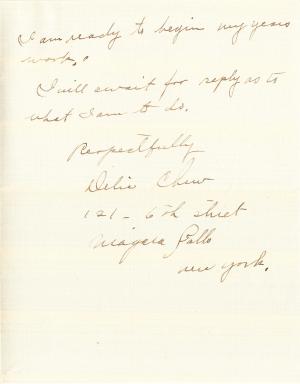