Student file of Benjamin F. Caswell, a member of the Chippewa Nation, who entered the school on September 8, 1911 and ultimately departed on June 7, 1918. The student did not attend the school continuously, but left and reentered. The file contains student information cards, applications for enrollment, medical/physical records, an outing evaluation, an outing records, certificates of promotion, a federal financial aid form, financial transactions, a trade/position record card, and correspondence. The file indicates Caswell was a lieutenant in the school and was living in Bemidji, Minnesota in 1918.

Note: In this file the student is identified as Benjamin F. Caswell and Frederick B. Caswell.

Note: A document of Benjamin F. Caswell was originally found in the folder of another student named Benjamin Caswell, NARA_RG 75_Series 1327_box 134_folder 5260.

Note: At the time of scanning at the U.S. National Archives, a document in this student file seemed to relate to a different student, Benjamin Guyon. That document has now been included with the Benjamin Guyon file: NARA_RG 75_Series 1327_box 119_folder 4837. 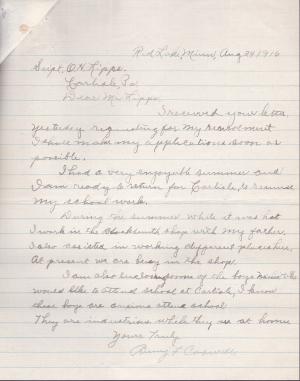