Student file of Norman Thompson, a member of the Pomo Nation, who entered the school on October 8, 1910 and departed on July 29, 1916. The file contains a student information card, an application for enrollment, an outing evaluation, a progress/conduct card, an outing record, financial transactions, and letters/correspondence. The file indicates that Thompson was a Captain of a troop at the school and was in the first outing party sent to work at the Ford Motor Co. in 1915 and 1916. He was then married and living in Irving, New York in 1916 and 1917. 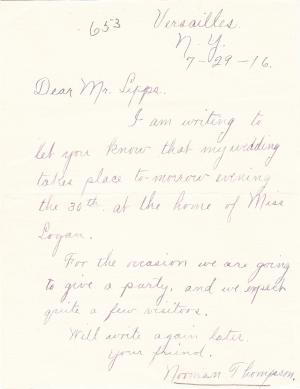