Richard Henry Pratt requests authority to renew the lease on the Hocker Farm. Pratt provides the justification for the lease by claiming that the lease goes to support the charity fund which in turn is used to rent additional farmland including the Henderson and Sanno Farms. Pratt ends by stating that until the Parker Farm is purchased by the Government that he is paying interest on the the $18,000 from his charity fund. 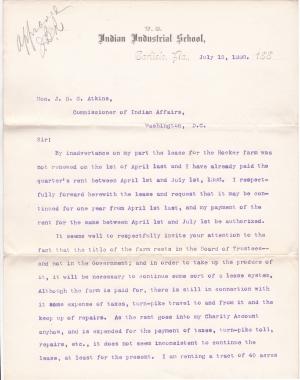