Richard Henry Pratt provides a report on his trip to Wisconsin and Dakota to recruit new students. Pratt notes that he first went to the Green Bay Agency and secured five students, but the enthusiasm among the parents was so strong that he could' have easily recruited twenty-five. Second, he visited the La Pointe Agency and instructed Green Bay Agent Stephens and La Pointe Agent Mahan to arrange for delegations of Oneidas to meet him in Milwaukee. Third, he went to the Sisseton Agency where he secured more students even though they were a little "unfavorable" to the school because Chief Renville's son died while a student at Carlisle. After Sisseton, Pratt traveled to Milwaukee, where he met Agent Mahan and his delegation. All of Agent Stephens' potential students had backed out, but Pratt now had fifteen total students. He informs the Commissioner that he knows he was sent to secure students for Hampton Institute or Carlisle Indian School, but the Menominee, Sisseton, and Chippewa all expressly preferred Carlisle.

Please note: This content is of a sensitive nature and reveals information about death and burial, which some readers may find troubling. Our aim is to provide access to this historical documentation in a respectful manner. Please see our Research Methodology page for more information about our process. 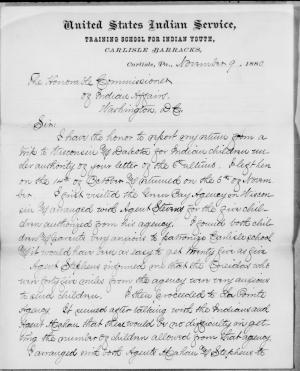