Discussion of and Approval for Renting the Henderson Farm

Carlisle Indian School Superintendent Moses Friedman forwards Agreements covering the rental of the Henderson tract of land adjoining the school for fiscal year 1911. Chief of the Education Division J. H. Dortch returns the contract and four copies and asks Friedman to sign it. Friedman returns the corrected and signed documents to the Commissioner of Indian Affairs.

Second Assistant Commissioner C. F. Hauke orders Friedman to explain why the school has rented the land in the past and what it's used for. Principal Teacher John Whitwell explains that the Henderson land is used as pasturage for the school herd, growing grain and corn during the summer, a skating pond for the pupils, and a picnic site for the pupils.

Assistant Commissioner F. H. Abbott transmits to the Secretary of the Interior approval between Friedman and A. F. Henderson for the school to rent the Henderson Tract for fiscal year 1911. 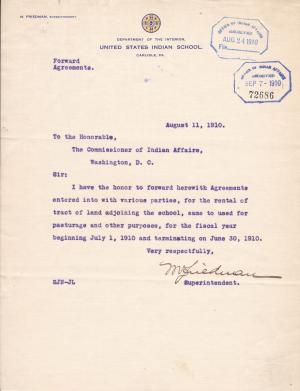