Student file of Tawa Ventewa, a member of the Hopi Nation, who entered the school on January 26, 1907 and departed on June 26, 1912. The file contains a student information card, medical/physical records, letters/correspondence, outing evaluations, a returned student survey, an outing record, a financial transaction, and a progress/conduct record. The file indicates Ventawa was living in Holtville, Arizona.

Note: In this file the student is referred to as Albert Tawaventewa and Tawa Ventewa.  A user has submitted information indicating that the student was also known by the name Dawavendewa, and was involved in local conflicts in his village which ultimately caused him to go to Carlisle. 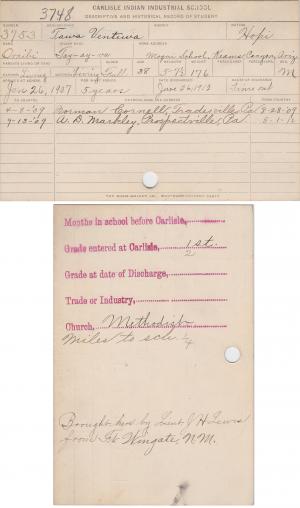