Student file of Susie Henni, a member of the Pueblo Nation, who entered the school on August 24, 1884 and ultimately graduated in 1898, deparing on August 29, 1898. The student did not attend the school continuously, but left and reentered. The file contains student information cards, a former student response postcard, returned student surveys, a report after leaving, a news clipping, and a letter/correspondence. The file indicates Henni was a housewife in Seama, New Mexico from 1907 to 1911 and a fourth class postmistress in Seama, New Mexico in 1913.

A descendant contacting the project indicated that Henni also went by the name Henna-nu-wence-ci-ay, and was from the village of Ste'-ya-ma in New Mexico. 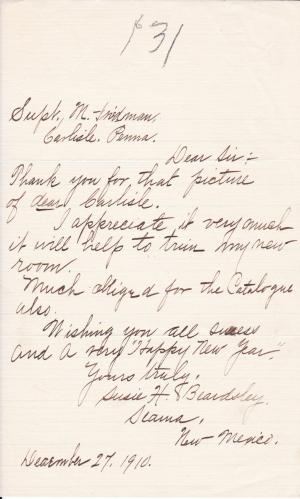