Student file of Sarah Beuchler, a member of the Paiute Nation, who entered the school on November 20, 1908 and departed on March 11, 1914. The file contains a trade/position record card, an application for enrollment, a student information card, a medical/physical record, financial transactions, outing evaluations, a progress/conduct card, and an outing record, and letters/correspondence. The file indicates Beuchler was studying nursing at the Lancaster General Hospital in Lancaster, Pennsylvania on the outing program, living in Benton, California in 1916, and had previously lived in Stewart, Nevada and Fort Bidwell, California. 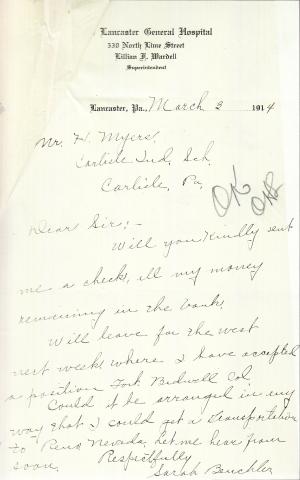