Student file of Salina Twoguns, a member of the Seneca Nation, who entered the school on October 19, 1902, graduated in 1910, and ultimately departed April 2, 1911. The student did not attend the school continuously, but left and reentered. The file contains student information cards, an application for enrollment, a medical/physical record, a progress/conduct card, a returned student survey, an outing evaluation, an outing record, correspondence, and a report after leaving. The file indicates that Twoguns began working in the Indian Service as a boys' matron in Greenville, California in April of 1911 and then returned to her home in Gowanda, New York.

Note: In the file the student is referred to as Selina Twoguns and Salina Twoguns 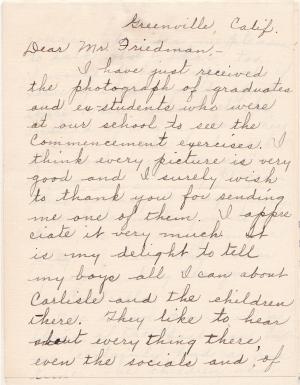