Student file of Peter Thomas, a member of the Klamath Nation, who entered the school on September 17, 1905 and departed on March 14, 1911. The file contains medical/physical records, financial transactions, an application for enrollment, former student response postcards, an outing evaluation, a student information card, an outing record, a report after leaving, a progress/conduct card, a trade record card, and correspondence. The file indicates Thomas was living in Etna Mills, California in 1912 and living in Black Bear, California while working underground in Gilta, California in 1913. 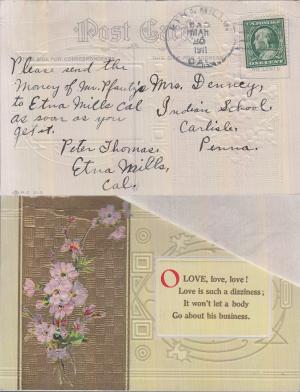