Student file of Peter Barnaby, a member of the Flathead Nation, who entered the school on March 2, 1911 and departed on September 5, 1916. The file contains financial transactions, a progress/conduct card, medical/physical records, outing evaluations, outing records, a student information card, an application for enrollment, a report after leaving, a federal financial aid form, and correspondence.

The file indicates that Barnaby was living in Arlee, Montana in 1916, he was a Private in Co. B of the 161st Infantry 41st Division of the American Expeditionary Force in 1917, and was a Private in Co. I of the 26th U. S. Infantry in the American Expeditionary Force serving in France in 1918. Barnaby also recounts his first experience with trench warfare in World War I and the injury he suffered from an exploding shell as well as his thoughts on France. 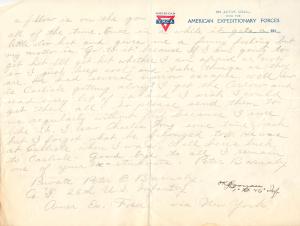