Student file of Louis Island, a member of the Oneida Nation, who first entered the school on August 23, 1898, graduated in 1908, and ultimately departed on December 4, 1910. The student did not attend the school continuously, but left and reentered. The file contains student information cards, a letter, a trade record card, newspaper clippings, an application for enrollment, a returned student survey, and a report after leaving indicating that Island worked for a time at the Hershey Chocolate Factory, attended Lebanon Valley College in Annville, Pennsylvania, and attended the Haskell Institute in Lawrence, Kansas. 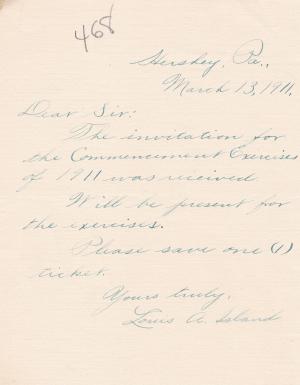