Student file of John Ostrigan, a member of the Alaskan Nation, who entered the school on October 22, 1910 and departed on April 17, 1912. The file contains a student information card, medical/physical, correspondence, an outing evaluation, a progress/conduct record, and an outing record.

Note: At the time of scanning at the U.S. National Archives, several documents in this student file seemed to relate to a different student, Alonzo Patton. Those documents have now been included with the Alonzo Patton file: NARA_RG 75_Series 1327_box 155_folder 6098. 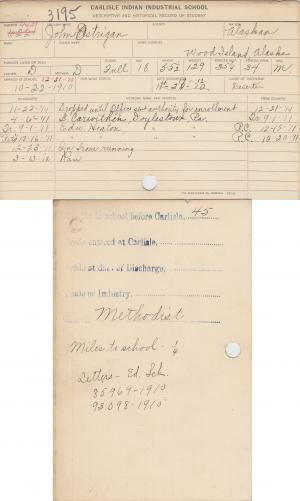