Student file of John Menaul Chaves (Rays of the Rising Sun), a member of the Pueblo Nation, entered the school on July 31, 1880 and ultimately departed on June 22, 1886. The student did not attend the school continuously, but left and reentered. The file contains student information cards, correspondence, former student response postcards, reports after leaving, and returned student surveys that indicate Chaves was occupied as a farmer and stock raiser.

Note: At the time of scanning at the U.S. National Archives, several documents in this student file seemed to relate to a different student, John Chaves. Those documents have now been included with the John Chaves file: NARA_RG 75_Series 1327_box 129_folder 5122.

Note: In a letter in the file, Chaves notes that while at school he was known as John Menual, but that he now goes by John M. Chaves. 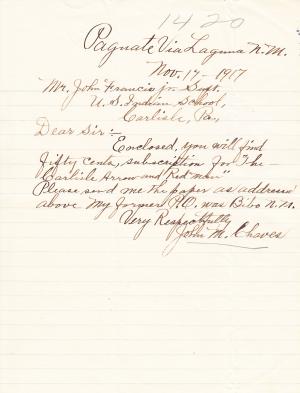