Student file of James Pawnee Leggings, a member of the Sioux Nation, who entered the school on October 7, 1909 and died at the school on April 28, 1912. The file contains a student information card, newspaper clippings, medical/physical records, trade/position record cards, an outing record, an outing evaluation, a progress/conduct card, and an application for enrollment. The files indicate that while Pawnee Leggings was at a Carlisle, he was a member of the band, the Y. M. C. A., and the Standard Literary Society. 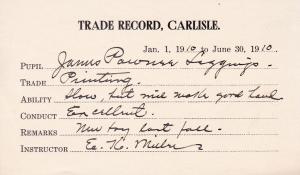