Student file of Hugh Chee, a member of the Apache Nation, who entered the school on November 4, 1886, and departed on August 5, 1896.  The file contains a student information card and a report after leaving indicating that Chee was farming in Fort Sill, Oklahoma, in 1910.

Note: When Chee's card was retyped it appears the name was erroneously interpreted as Chu, but there is no indication that he ever intentionally used that name. 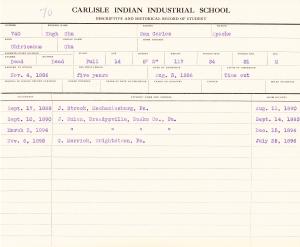