Student file of Herbert Pappin, a member of the Osage Nation, who entered the school on October 3, 1912, and ultimately departed on January 3, 1917. The student did not attend the school continuously, but left and reentered. The file contains student information cards, applications for enrollment, medical/physical records, an outing record, an outing evaluation, a vacation request form, a federal financial aid form, correspondence, financial transactions, and a photograph of Herbet Pappin. The file indicates that Pappin joined the Oklahoma State Militia and was a member of Co. D 7th Oklahoma Infantry stationed at Fort Sill, Oklahoma in 1917. 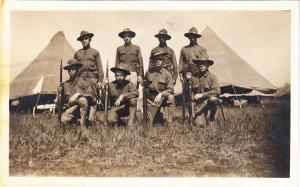