Student file of Eva Flood, a member of the Sioux Nation, who entered the school on September 16, 1910 and departed on March 22, 1913. The file contains an industrial certificate in laundering, an application for enrollment, a medical/physical record, a former student response postcard, outing evaluations, an outing record, correspondence, a progress/conduct card, a student information card, and a report after leaving indicating that she was a housewife in Rosebud, South Dakota in 1914.

Note: Upon leaving the school Eva Flood was addressed as Mrs. Ben Stead.

Note: A document of Eva Flood's was originally found in the folder of another student; Sherman Durrin, NARA_RG 75_Series 1327_box 45_folder 2252. 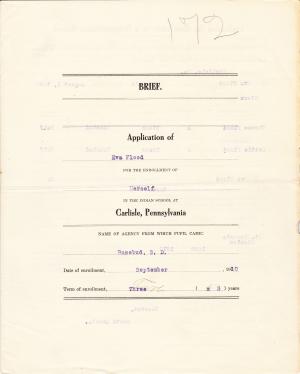