Student file of Daniel Needham, a member of the Chippewa Nation, who entered the school on September 27, 1911, and ultimately departed on February 5, 1915. The student did not attend the school continuously, but left and reentered. The file contains student information cards, correspondence, financial transactions, medical/physical records, applications for enrollment, outing records, and outing evaluations. The file indicates that Needham worked on outing at the St. Charles Place Hotel in Atlantic City, New Jersey in 1914 and was attending the Haskell Institute in Lawrence, Kansas in 1915 and 1916. 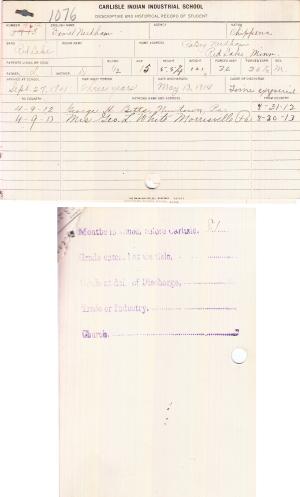