Student File of Cecil Collins, a member of the Chickasaw Nation, who entered the school on October 30, 1915 and ultimately departed on December 8, 1916. The student did not attend the school continuously, but left and reentered. The file contains student information cards, medical/physical records, an application for enrollment, an outing record, financial transactions, and correspondence including a letter granting Collins' request to be discharged from the school. The file indicates Collins worked for the American Iron and Steel Co. in Lebanon, Pennsylvania in 1916.

Note: In this file the student is identified as Cecil Collins, Cecil Cline Collins, and Cecil C. Collins. 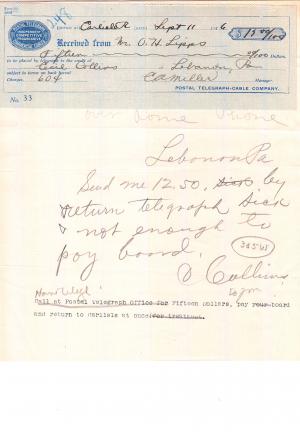