Student file of Alexander Knocks-Off-Two, a member of the Sioux Nation, who entered the school on August 19, 1905, and departed on March 26, 1913. The file contains correspondence about the possibility of Alexander returning to the school, medical/physical records, outing records, outing evaluations, a progress/conduct card, an application for enrollment, and a student information card that lists one outing.

Note: In this file the student is identified as Alexander Knocks-Off-Two, Alex Knox, and Alex Knocks. 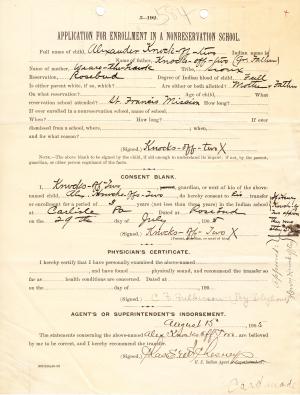