Student file of John Levi Bastian, member of the Puyallup Nation, who entered the school on February 9, 1909. No departure date is given, however it is known that Bastian graduated in 1910. The file contains an application for enrollment, a former student response card, a medical/physical record, an outing evaluation, a news clipping, a trade/position record card, and a returned student survey. The file indicates Bastian was a carpenter and boat builder in Chehalis, Washington in 1913 and was living in Taholah, Washington in 1913.

Note: The student is identified as John Bastian and John Levi Bastian. 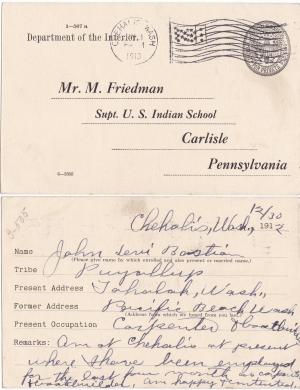