Pratt Responds to Request for Return of Edwin Schanandore

Richard Henry Pratt responds to an Office of Indian Affairs regarding a request from Daniel Schanandore to have his son Edwin returned home. Pratt notes that Edwin graduated in 1889 and immediately after went to work on a farm in Bucks County who subsequently became the farmer at the Carlisle Indian School with Edwin as his assistant. As a result, Edwin can go home at any point and is entirely independent. 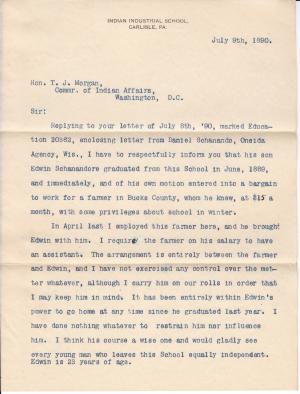