Richard Henry Pratt responds to an Office of Indian Affairs letter regarding an exhibit for the Indian Department at the Columbian World's Fair. Pratt states that he has placed Alfred John Standing in charge of the exhibit due to his experience with the New Orleans exhibit. As a result Standing has developed a plan for an exhibit at a cost of $240.

Pratt also discusses how another exhibit by ethnologists who are planning to create an exhibit showing the Indian as an Indian will harm the future advancement of Indians. 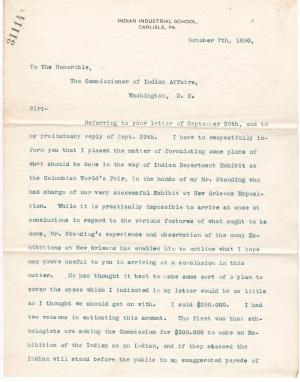