Second Assistant Commissioner of Indian Affairs C. F. Hauke informs Supervisor in Charge of the Carlisle Indian School Oscar H. Lipps that they have just sent two color maps of the parts of Europe that are in conflict and suggests hanging them up in frames and using pins to mark different points of interest.

Commissioner Cato Sells tells Lipps that he should put one of the maps in the library and announce the receipt of the maps to all of the students in Chapel. Sells states that the maps should be used to show the movements of the armies involved in the war in Europe but that the school should not "encourage the war spirit" amongst the students.

Lipps agrees with Sells' recommendations and asks if students should be allowed to attend a football game in Philadelphia. This is in question because students spend large amounts of money to attend these games. Lipps suggests that they could potentially use the athletic fund to pay for the students to attend the game because it fosters school spirit. 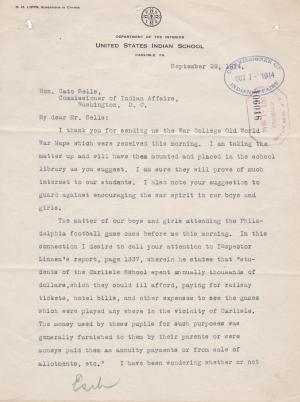