Student file of William (also known as Henry) Sweet Medicine, a member of the Cheyenne Nation, who entered the school on January 4, 1909. No departure date is given. The file contains applications for enrollment, trade/position record cards, medical/physical records, a progress/conduct record, an outing record, former student response postcards, outing evaluations, a returned student survey, and a report after leaving indicating Sweet Medicine was farming in Birney, Montana in 1914. 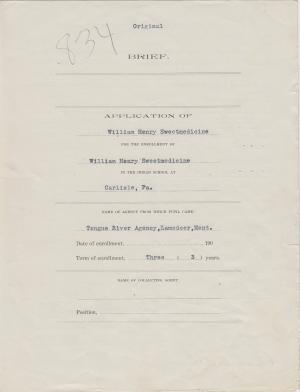