Student file of Stella Bear, a member of the Arikara Nation, who entered the school on July 3, 1903 and ultimately graduated in 1910, departing on July 13, 1910. The student did not attend the school continuously, but left and reentered. The file contains student information cards, a medical/physical record, a report after leaving, progress/conduct cards, a trade/position record card, and correspondence that indicate Bear was appointed as a field matron in Cantonment, Oklahoma in 1910, was living in Bismarck, North Dakota in 1913, and was working as a seamstress at a boarding school in Elbowoods, North Dakota in 1916. 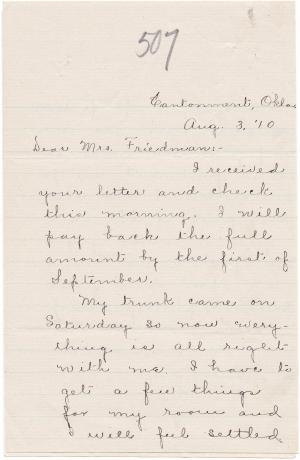