Student file of Sally Denny, a member of the Oneida Nation, who entered the school on September 29, 1894, and departed on April 17, 1900. The file contains a student information card, a former student response postcard, a returned student survey, and a report after leaving indicating she was married to John Hill and living in West De Pere, Wisconsin, in 1913.

Note: In this file the student's name appears as both Sally Denny and Sallie Denny. She writes back to the school under her married name Sally Denny Hill. 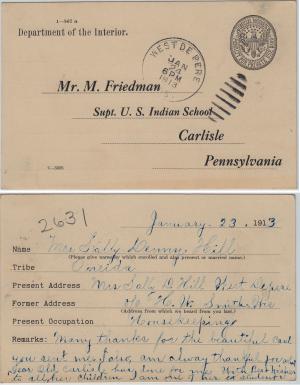