Student file of Raymond Hitchcock, a member of the Klamath and Hoopa Nations, who entered the school on September 19, 1905, graduated in 1910, and departed on April 5, 1910. The file contains a student information card, correspondence, news clippings, trade/position record cards, a medical/physical record, a report after leaving, an outing record, and a progress/conduct card. The file indicates Hitchcock began working as a printer in a shop in Shawnee, Oklahoma shortly after graduating in 1910 and was living in Eureka, California in 1913.

Note: In the file the student is referred to as Raymond Hitchcock and Ray Hitchcock. 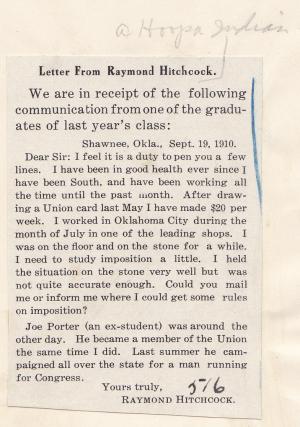