Student file of Otto Thunder, a member of the Chippewa Nation, who entered the school on December 22, 1912 and departed on January 27, 1917. The file contains a student information card, an application for enrollment, financial transactions, an outing record, correspondence, and a federal financial aid form. The file indicates Thunder worked for the Ford Motor Co. in Detroit, Michigan in 1915 and 1916 under the outing program and continued to work for the Ford Motor Co. in Chicago, Illinois in 1917. 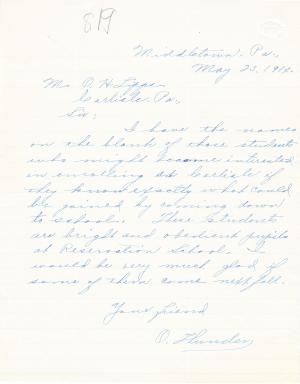