Student file of Olive Chisholm, a member of the Shawnee Nation, who entered the school on September 10, 1902 and ultimately departed on February 3, 1911. The file contains a photograph, news clippings, trade/position record cards, a progress/conduct card, medical/physical records, and an application for enrollment. The news clipping indicates the student returned to her home in Tulsa, Oklahoma.

Note: The student in this file is identified as Olive Chisholm and Ollie Chisholm.

Note: Some of Olive Chisholm's documents were originally found in the folder of another student; Grace Wayman, NARA_RG 75_Series 1327_box 51_folder 2519. 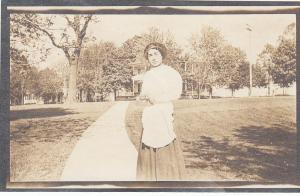