Student file of Minnie Crow, a member of the Eastern Band of Cherokee, who entered the school on November 2, 1910 and departed on September 5, 1911. The file contains a student information card, an application for enrollment, medical/physical records, an outing evaluation, an outing record, and a report after leaving indicating that Crow had died in 1911 after departing from Carlisle.

Note: In the file the student is referred to as Minnie Crow and Minnie Crowe. 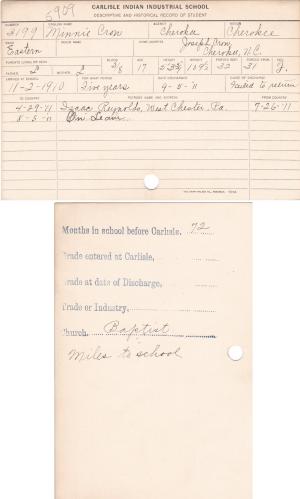