Student file of Lystia Wahoo, a member of the Eastern Band of Cherokee, who entered the school on June 20, 1901 and ultimately departed on March 29, 1909. The student did not attend the school continuously, but left and reentered. The file contains student information cards, an application for enrollment, a report after leaving, correspondence, a news clipping, and a returned student survey indicating that Wahoo was a housekeeper in Cherokee, North Carolina in 1910. 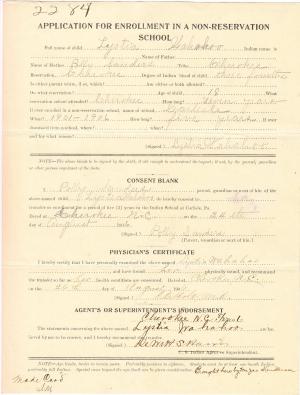