Student file of Lyman Madison, a member of the Mashpee Nation, who entered the school on December 29, 1909, graduated in 1917 and ultimately departed on May 6, 1918. The student did not attend the school continuously, but left and reentered. The file contains a student information card, an application for enrollment, correspondence, a returned student survey, a former student response postcard, a conduct card, trade record cards, financial transactions, an outing record, a report after leaving, and certificates of promotion. The files indicate that Madison studied painting while at Carlisle, and worked for the Ford Motor Company in Detroit, Michigan after leaving.

Note: One of Lyman Madison's documents was originally found in the folder of another student; Isaac Cook, NARA_RG 75_Series 1327_box 75_folder 3644. 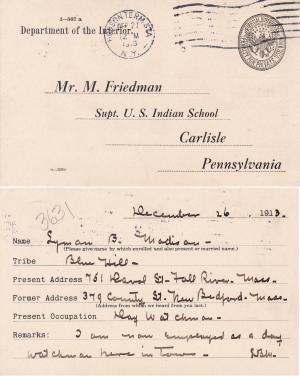