Student file of Luzenia Tibbetts, a member of the Chippewa Nation, who entered the school on June 23, 1895, graduated in 1901, and departed on August 31, 1904. The file contains a news clipping, student information cards, a report after leaving, returned student response surveys, correspondence, and former student response postcards. The file indicates that Tibbetts attended the Bloomsburg State Normal School in Bloomsburg, Pennsylvania starting in 1902 and graduating in 1904, was a teacher at the Carlisle Indian School in 1904 and 1905, and was a housekeeper in Bena, Minnesota in 1913. 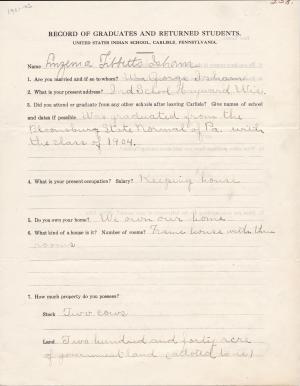