Student file of Louis D. White, a member of the Mohawk Nation, who entered the school on November 24, 1904 and ultimately departed on July 14, 1917. The student did not attend the school continuously, but left and reentered. The file contains a trade/position record card, student information cards, applications for enrollment, medical/physical records, a returned student survey, correspondence, a report after leaving, a progress/conduct card, an outing record, and financial transactions. The file indicates that after leaving the school he re-enrolled at Carlisle in order to take a student course with the Ford Motor Company in 1917.

Note: In the file the student is identified as both Louis D. White and Lewis D. White. 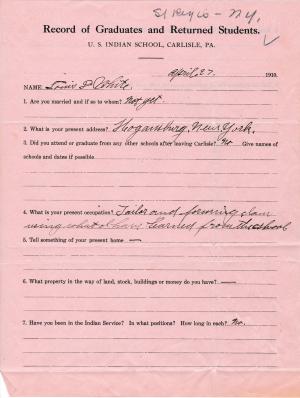