Student file of Joseph Muggins, a member of the Sioux Nation, who entered the school on November 6, 1913 and departed on June 10, 1914. The file contains a student information card, financial transactions, the proceedings of a court martial, and correspondence. The file indicates Muggins was living in Rosebud, South Dakota in 1914 and 1915.

Note: At the time of scanning at the U.S. National Archives, several documents in this student file seemed to relate to different students, Cat Barnoskie and Joseph Guyon. Those documents have now been included with the respective files: Cat Barnoskie, NARA_RG 75_Series 1327_box 84_folder 3903; and Joseph Guyon, NARA_RG 75_Series 1327_box 95_folder 4213. 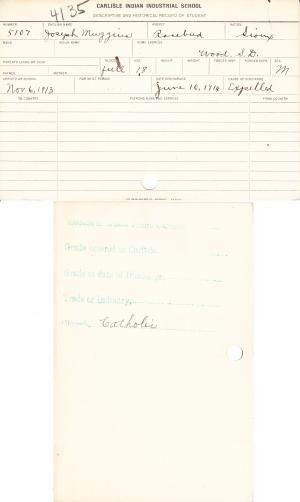