Student file of John White, a member of the Mohawk Nation, who entered the school on June 29, 1900 and ultimately departed on February 19, 1911. The student did not attend the school continuously, but left and reentered. The file contains student information cards, letters, former student response postcards, a trade/position record card, an application for enrollment, medical/physical records, a progress/conduct card, news clippings, an outing record, a returned student survey, an essay that White wrote as a senior, and a report after leaving. The file indicates that White began working for the Mt. Holly printing Company in 1910, the Corman Printing Co., and then the Herald Office in Carlisle, Pennsylvania. He married Dorothy Middleton in 1914.

Note: Some of John White's documents were found in the folder of another student, also named John White, NARA_RG 75_Series 1327_box 130_folder 5132. 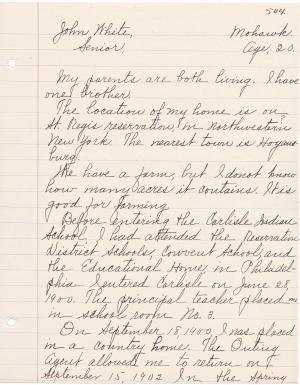